Townleyhall megalithic passage tomb it is part of the Boyne Valley group of passage tombs that includes the much larger mounds at Newgrange, Knowth, and Dowth. The chamber at Towneyhall is a simple rectangle at the end of a short passage. Concrete markers show where the missing passage orthostats once stood. On the mornings around the Summer Solstice, the passage and chamber are aligned with the rising sun.

Kingsmountain decorated stone located near Loughcrew is 2.5 metres high and is said to have been a roof lintel from a megalithic tomb that stood on the site. This sprial is 40cm in diameter and is the largest and most defined spiral on the stone. The Kingsmountain stone is situated in a field about 40 metres from the end of a narrow lane.

Balgeeth mound located in Ardcath on a ridge between Newgrange to the North and Fourknocks to the East.

Balgeeth Sheela-na-Gig is set in the wall of a farm house. It was discovered turned inwards when the wall at the entrance to the farm house was damaged by a milk lorry.

The Standing Stone is just 1.3 metres high and is situated in the middle of a field with no other stones in sight. The southwest face is ornamented with picked concentric circles and other designs.

Baltray standing stones are positioned on high ground north of the Boyne estuary near the sea. The larger of the two stones is 3 metres high, the other stone is 2 metres high.

The flat side of the larger standing stone points to Rockabill Island about 25km out to sea at the same angle as Winter Solstice rising sun.

Stonehenge in England is probably the best known and most studied megalithic structure anywhere in the world, yet its original purpose is still unclear. I imagine Stonehenge to have been a glorious ancient temple, a place of spiritual, religious and ceremonial splendor. 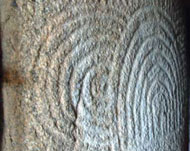 The Isle of Goats just off the coast of Brittany is home to the wonderful Gavrinis megalithic cairn. The cairn is about 5500 years old, it is 60 metres in diameter and covers a passage and chamber which is lined with elaborately engraved stones.

Cairnpapple was discovered immediately after the Second World War – all that was discernable at the time was a rough circular embankment known as a henge monument – and a central cairn set in a rather random-looking position within the circle.