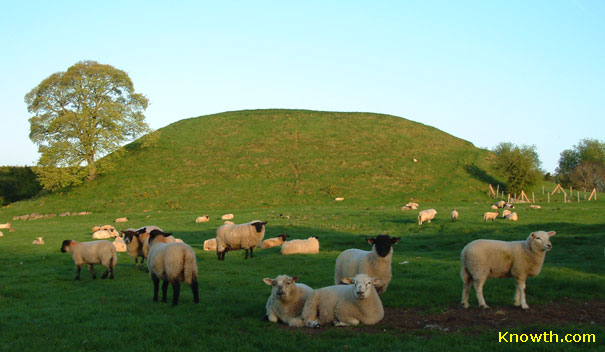 Dowth Mound viewed from the east

Dowth the Fairy Mound of Darkness is about the same size as Newgrange and Knowth and was built in the same period over 5,000 years ago. The mound was subjected to a very unprofessional excavation in 1847, two passage tombs were discovered but the mound was severely damaged in the process. The passage tombs are much less spectacular than Newgrange or Knowth with shorter passages and lower roofs. Both are on the western side of the mound, they are referred to as Dowth North and Dowth South. The Dowth North passage is 14 metres in length; the chamber is cruciform in shape with an annex off the right hand recess, the chamber roof is corbelled and is 3 metres high.

Dowth is not on the official tour from the Brú na Bóinne Visitor Centre. Newgrange, Knowth and Dowth are all located north of the River Boyne however Newgrange and Knowth are accessed through the Brú na Bóinne Visitor Centre located on the south bank of the river. Visitors to Dowth can drive directly to the site on the north bank of the river, a couple of miles from the Slane to Drogheda road. There is no public access to the two passage chambers at Dowth; however visitors will be rewarded with a real sense of a spiritual connection to this ancient site as they ramble around the usually peaceful mound.

Anne-Marie Moroney has been observing winter sunsets at Dowth since 1997. From the beginning of October to the end of February the sun sends its rays from the south-west into the chamber. As the sun appears progressively lower in the sky towards the winter solstice, the beam travels first over the sill stone, then enters the chamber and finally shines directly onto the stones at the back of the chamber. Dowth Sunset Images.

The sun symbols on Kerbstone 51 at Dowth are similar to those on the backstone of Cairn T at Loughcrew. The seven sun symbols must surely have an astronomical or calendrical purpose. 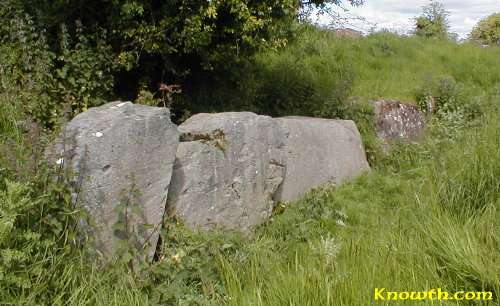 Kerbstones at the base of Dowth