An anthropological lens applied to the early settlers of the Boyne Valley, Ireland 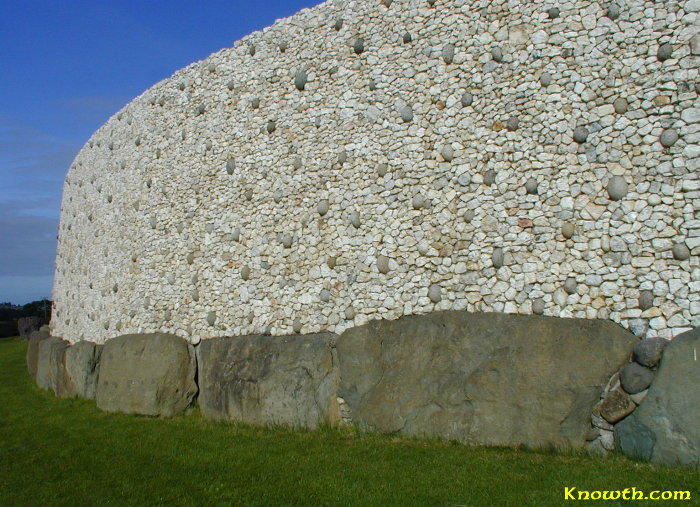 The early settlers of the Boyne Valley

Dr. Gabriel Byrne opened the lecture by posing some questions:

The 'person' of the early settlers of the Boyne Valley

Brú na Bóinne people lived about 6000 years ago (29 seconds of a 24 hour day when compared to the history of the person). We are in fact talking about modern times when we talk about Brú na Bóinne in comparison to the origins of the early person.

Hominoids (person like creatures with an immortal soul) are now thought to date to about 3.5 million years ago. Brú na Bóinne people, like us are Homo sapiens (wise) sapiens (wise). We are the decedents of a long line of peoples.

Homo sapiens sapiens first appeared about 160,000 years ago in Europe. Another species of person simultaneously occupied non-glacial Europe, the Neandertal person. Their technology (hunting tools etc) was inferior to Homo Sapiens Sapiens, they succumbed to the presence of the modern person.


Earliest evidence of Homo sapiens sapiens (the very wise ones)

Cro-Magnon (40,000 BC), Homo Sapiens Sapiens traceable to 160,000 BC had superior ability to extend hunting technology by adding thousands of implements for specific functions of hunting and gathering, in comparison to a very limited number of rudimentary tools developed by Neandertal peoples (Neander Valley, Dusseldorf Germany).

50,000 - 60,000 years ago the pace of human life, of cultural evolution, accelerated rapidly. Cultural explosion resulted from the development of full cognitive fluidity, that is new connections between previously isolated mental domains - environmental, technical, and social intelligence.

The result was deeper social relationships, the development of visual symbolism, the use of art as a means of expression and communication

'Humankind now had the ability to bring the natural and social worlds together in a seamless synthesis that is characteristic of many human societies' (Fagan p.92).

By 30,000 years ago the final push towards modernity had begun. 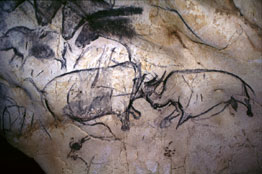 The Chauvet-Pont-d'Arc cave in France has sophisticated art from the Aurignacian period, at the beginning of the Upper Palaeolithic (32,000 B.P.), the time when anatomically modern people first began to replace Neanderthals in Western Europe.

Agriculture was not practiced before 8500BC, it was not stumbled upon as we sometimes think. Mesopotamia (600x250miles) between the Euphrates and Tigris rivers was a fertile producing land, but at this time became a sticky marshy territory quite hostile to the person, with rising world temperatures that eventually saw the glacial caps of Europe recede to the Artic circle.

Draught was the main cause of the commencement of the agricultural revolution. With the close of the Ice Age, Asian climatic conditions became quite dry, forcing peoples and animals towards the Jordan Valley, where water and foliage was in abundant supply.

Conditions produced by symbiosis (living together) of humans, animals and plants, created favourable conditions for foragers to experiment with cereal grasses and the herding of goats and sheep in a short period of time (take 25 years as one generation).

At Ain Ghazal (8500BC) goat bones showing abrasions from tethering testify to early herding of domestic stock. At Jericho a small camp flourished showing that the people practiced keeping animals by at least 8500BC.

Jericho also yielded compelling evidence of ancestor worship in the form of human skulls showing that these people practiced farming mixed with close ties to the transcendental through the dead.

The population of the Fertile Crescent increased considerably between 7600BC and 6000BC scattered in permanent villages. Crops grown were Emmer wheat, barley, lentils and peas were grown in small fields, crops, were rotated sustain soil fertility.

Abu Hureyra grew rapidly until it covered about 12 ha forming a close-knit community of one-story mud-brick houses, joined by narrow lanes and courtyards and finally abandoned about 5000BC.

The village of Ali Kosh on the plains of Khuzistan, north of where the Tigris and Euphrates becomes one river, tells the same story, except that the story continues to this day.

The inhabitants drove large herds of goats and sheep to the highlands during the hot summer months bringing them back to lush lowland pastures in the autumn. Jarmo in the Zagros Mountains is another prehistoric site which was in its heyday in 5000BC.


Where did Brú na Bóinne peoples come from?

Was it the Fertile Crescent, Israel, Egypt or close to home?

The Egyptians forced the sons of Israel into slavery, and made their lives unbearable with hard labour, work with clay and with brick, all kinds of work I the fields; they forced on them every kind of labour. Pharaoh then gave his subjects this command: 'Throw all the boys born of the Hebrews into the river, but let all the girls live' These lines from Exodus would be a perfect reason for the arrival of these peoples. The difficulty is that these events are separated by over 3000 years.

Egypt developed agriculture approx 3500BC. Material culture and culture developed in Egypt from this time and populations expanded. However Brú na Bóinne people were already here.

Zohary and Hopf's 'Domestication of Plants in the Old World' shows that migration from the Fertile Crescent (probably from Mesopotamia) had reached Britain, France and Spain by 5000BC.

Brú na Bóinne people arriving in Ireland 4000BC had accumulated vast experiences in their migratory history from the Fertile Crescent. New opportunities are always sought by peoples in densely populated areas and with new knowledge in agriculture. As explorers they assumed new goals and ventured west.

Their accumulated technology was vast: Mathematical knowledge, Astronomical knowledge, Transcendental aspirations with funerary practices of burying important leaders and ancestors so that they could at a later date be treated as deities Building Skills and Systems understanding.

The reconstructed Sumerian Ziggurat at Ur, Iraq, originally built about 2300BC

These mounds were of such significance that old testament scholars today see, among other images, the imagery of the 'Ladder of Jacob' recalling the steps of these Mesopotamian and Egyptian mounds and their ascent to deity.

Howell - the building of prehistoric monuments was based on building models. These models would then provide the specification for the actual building, which he calls 'token based project management'. They most likely involved levers, sledges and rollers. Professor Hitchins suggests that the builders of ancient monuments thought in systems, that is a way of tackling complex issues, messy problems and difficult situations.


The building of Newgrange

Newgrange mound required a committed workforce. The momentum provided by dedication to a project with transcendental connections is a mindset, which would be difficult to replicate today. All of the Newgrange people were of one mind and one goal, they were dedicated to the task and were committed one and all because there was something in it for all – new life and new blessings. There appears to have been a European pilgrimage site? Why here? It was the end of their migratory journey. It would be the monks of early Christendom in Ireland who would continue the pilgrimage.

Little doubt about knowledge of astronomy and astrology, which would have accumulated through their 'wise men' over millennia. Ancient peoples of the Mediterranean and the Fertile Crescent had become highly knowledgeable in writing and in the use and practice of mathematics, providing architectural skills to build impressive mounds.

This is without doubt part of your heritage and I congratulate you on such a majestic one and encourage you to preserve it and widen the world knowledge of it.

The Middle East-2000 years of history from the rise of Christianity to the present day, Lewis Bernard (2000), London: Phoenix Press.