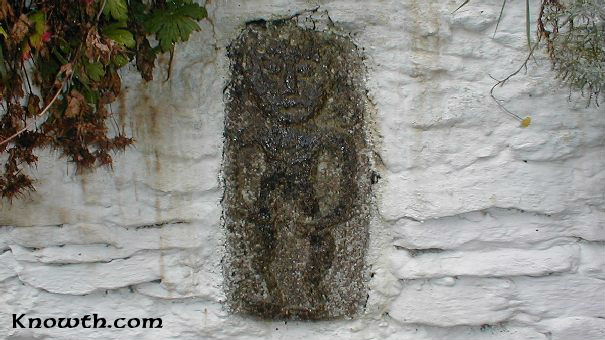 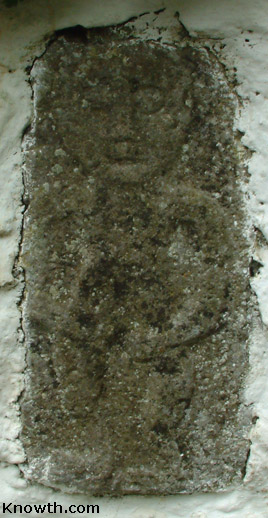 This fine example of a Sheela-na-gig is set in the wall of a farm yard at Balgeeth, Ardcath, Co. Meath. It was discovered turned inwards when the wall at the entrance to the farm yard was damaged by a milk lorry.

The name sheela-na-gig is from the Irish language however the exact meaning is uncertain. Eamonn Kelly in his book on Sheela-na-gigs: Origins and Functions suggests 'The old hag of the breasts', Sighle na gCíoch in Irish or 'The old woman on her hunkers', Síle-ina-Giob in Irish.

Other names for sheela-na-gig include the Devil Stone, the Idol, the Evil Eye Stone, Julia the Giddy, Shiela O'Dwyer, Cathleen Owen, Saint Shanahan, Whore, the Witch, and the Hag of the Castle.

Theories abound as to the meaning and dating of Sheela-na-gigs, with a consensus almost being arrived at which agrees that they appear mostly on churches and castles built after the 12th century and are possibly a continuation of a much earlier pagan custom. There are many opinions as to what the figures represent and their raison d'etre. These opinions are as diverse as the shapes and styles of the Sheelas themselves and include Pagan Spirit, Mother Earth, Earth Goddess, Pagan Goddess, good luck symbols, fertility symbols, figures to celebrate womanhood etc. It is widely believed that they repel evil spirits.  More ...

An article by David Keeling from Ríocht na Midhe 1984 - Records of the Meath Archaeological and Historical Society, Vol. VII, No.3.

This hitherto unrecorded exhibitionist figure (Sheela-na-Gig), which was recently brought to my attention by Mr. Brendan Scally (Old Fingal Society), first came to light several years ago during the removal of a masonry gate pillar at the entrance to Mr. John Corry's farmhouse at Balgeeth, Ardcath. The Ardcath figure, which is at present in the possession of Mr. Corry, was built into the filling of the gate pillar and obviously intentionally concealed from view. It measures 54cm (21 inches) high by 28cm (11 inches) maximum width and is carved in false relief on a limestone block, 24cm (9 inches) thick.

The figure fills the frame formed by the cut edge of the stone, and although considerably weathered, on closer examination most of the detail is still discernible. The legs are slightly bent and face in the same direction, although the left foot is missing, presumably due to weathering. The arms hang symmetrically across the body and rest on the thighs to touch or indicate the pudenda. The hands have a faint suggestion of fingers. The bent elbows are prominent and the similarity in the position of the arms being mainly responsible for the symmetry. The breasts are only slightly suggested. The figure has a large flat and pear-shaped head with a short neck; the eyes, nose and mouth are prominent. A shallow depression at the left side of the head is probably due to weathering.

The Ardcath figure falls into type 3 (those who pass both hands in front of the body to touch or indicate the pudenda) of Jerman's (1981.13) taxonomy which is based on the part played by the arms and hands. He shows distinct groupings, suggesting that regional styles came into being with type 3 figures mainly occupying the midland lowlands. In Ireland (and Britain) exhibitionists were, and are very obvious on churches, abbeys and castles with little or no other figure sculpture, (Weir, 1980.62).

It has been suggested by Andersen (1977) that the post-romanesque insular carvings are apotropaic: magical figures set up to ward off evil or attack depending on their particular location. With few exceptions, the vast majority of type 3 figures are undatable since they have been removed from their original context. For this reason any suggestion as to the date or function of the Ardcath example must be very tenuous. However, on the basis that homogeneity of style suggests contemporaneity of fabrication and that a few type 3 figures have suggested dates, a late medieval date is suggested for the Ardcath figure.

Acknowledgements: My sincere thanks to Brendan Scally for bringing this figure to my attention, to Mr. and Mrs. Corry for allowing me examine the figure and providing information regarding the circumstances of the find. 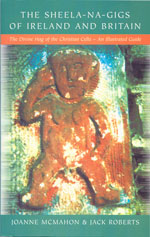 The Sheela-na-Gigs of Ireland and Britain by Joanne McMahon and Jack Roberts.

Sheela-na-Gigs are carvings of female images depicted as naked and posing in a manner which accentuates the most powerfully evocative symbol of the vulva. They were erected on many churches of the medieval period and invariably in a prominent position such as over the main entrance door or a window.

There are 140 Sheela-na-Gigs listed, (100 in Ireland, 40 in Britain) and each entry includes a description, location and a drawing. 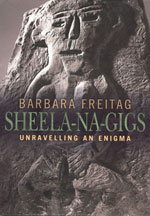 The presence of carvings of naked female figures may seem rather incongruous in medieval churches, monastic sites and castles, but that all depends on what they symbolised. Taking a rational rather than spiritual approach, Barbara Freitag argues that these female figures are not connected to eroticism, love-making or warnings against lust, but to childbirth, to life-giving powers, renewal and fertility. 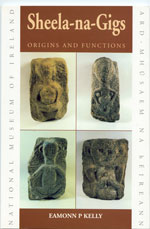 Sheela-na-gigs are carvings of naked females posed in a manner which displays and emphasises the genitalia. Once thought of in negative terms only, they have more recently come to be regarded in a positive light. There is little tradition or folklore recorded in Ireland which provides any useful insight into their origin or function. Here Eamonn P Kelly of the National Museum of Ireland examines the examples throughout the countryside and others held for display, and makes comparisons with similar figures occurring in Britain and the rest of Europe.