The archaeology of Knowth in the first and second millennia AD 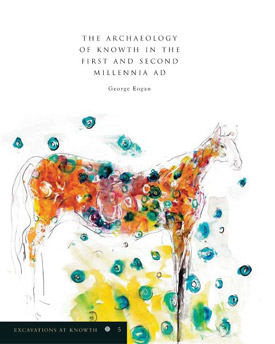 Excavations at Knowth: The archaeology of Knowth in the first and second millennia AD.

Volume 5 of the "Excavations at Knowth" series presents the findings relating to the use of the site from the Late Iron Age to the modern era. The huge array of finds excavated at Knowth associated with the period under consideration are presented, with an accompanying CD-ROM cataloguing the un-illustrated finds.

A series of appendices deals with such topics as the metal content of a selection of the Roman, Viking, and Early Christian artefacts from Knowth, and the findings of a geophysical survey conducted on one area of the site in late 2011, among others.

Listing at the Royal Irish Academy.

Excerpt from the Introduction by George Eogan

A major programme of archaeological excavation commenced on June 18th 1962 at the passage tomb cemetery at Knowth, under the direction of the author. This research excavation continued on a seasonal basis for more than 40 years, resulting in the near total excavation of this monument complex. The site had a long, though not continuous, history of both ritual and settlement that spanned some six millennia, from the beginning of the Neolithic to the modern era.

The present volume is the fifth in a series that outlines the results of the excavation programme. The first two published volumes (Eogan 1984; Eogan and Roche 1997) deal with aspects of the Neolithic, Grooved Ware and Beaker period archaeology of the site. The third volume (McCormick and Murray, 2007) provides analysis and discussion of animal bone from three settlement horizons at the Passage Tomb 1 mound, which date to the eighth, tenth/eleventh and late twelfth to sixteenth centuries AD, respectively. Volume four (Byrne, Jenkins, Kenny and Swift, 2008) examines the historical role of Knowth and the history and settlement of the wider Brugh na Bóinne area, from the seventh/eighth centuries to the beginning of the twenty-first century.

That volume also contains an analysis of ogham inscriptions identified in the eastern and western passage tombs of the main mound. This fifth volume presents archaeological evidence for the history of Knowth spanning the period from the Iron Age to the twentieth century. The sixth volume (in preparation) in the Knowth monograph series will treat of the archaeology of the main passage tomb mound, while the seventh volume will deal with the megalithic art of the site.

The archaeological evidence for later use of the Knowth passage tomb cemetery was mainly distributed on the mound of Passage Tomb 1 and its immediate vicinity. It includes fourteen burials of Iron Age date; fourteen burials of fourth/fifth and seventh/eighth century AD date, an eighth-century double-ditched enclosure and a tenth/eleventh-century open settlement. This Early Christian settlement history was followed by Norman fortification of the mound in the thirteenth century, with subsequent settlement that arose out of the Cistercian Order acquiring the site and its neighbouring lands, including a fourteenth-century enclosed courtyard farm and post medieval houses of mainly eighteenth century date, which constitute a habitation cluster. It may also have been at this time that the public road, which bisected the site, was constructed; as a result, a separate portion of the site on the eastern side of the road became isolated from the main area of the Passage Tomb 1 mound. This was followed during the nineteenth century by the establishment of a large dwelling and farmyard.