Excavations at Knowth: Historical Knowth and Its Hinterland 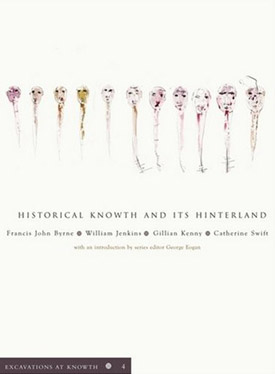 Volume 4 in the Excavations at Knowth series by Francis John Byrne, William Jenkins and Gillian Kenny.

The studies that constitute this fourth volume in the "Excavations at Knowth" series of monographs evaluate the historical role of Knowth and Brugh na Boinne from the earliest references to the region in the seventh and eight centuries down to the present. Purchase at Amazon.com or Amazon.co.uk


The first chapter, by Catherine Swift and Francis John Byrne, deals with the earliest history of Knowth, from which it is clear that Knowth was an important place within the kingdom of North Brega, and indeed became the royal residence of the kings of that region. A significant part of this chapter is the comprehensive set of pedigress of the kings of Brega extending from the seventh to the twelfth century. Chapter I also considers the ogham and vernacular inscriptions found in the Knowth passage tombs - five scholastic oghams and sixteen personal names in the vernacular style.

In Chapter II, Gillian Kenny focuses on the Medieval period. She begins with the demise of the old Brega kingship and its replacement by a new ritual and political structure following the arrival of the Cistercians in the area in 1142 and the establishment of the monastery at Mellifont. Knowth and the surrounding area were incorporated into the Cistercian land holdings in 1157; this resulted in transformation of agricultural practices and reforms of land-holding structure. The occupation of the area by the Anglo-Normans, under Hugh de Lacy, shortly afterwards brought more extensive changes and a new pattern of settlement. The Reformation led to the demise of that pattern of settlement and its associated religious practice, and with Mellifont's dissolution in 1539 its properties, including Knowth, were disposed of.

In Chapter III, William Jenkins points out that the emergence of the Protestant landed gentry coincided with these changes. The Dowth area, however, remained in the hands of the old Anglo-Norman Netterville family. A consolidation of the landed gentry in the Brugh na Boinne area took place in the eighteenth century, alongside a phase of economic development that saw the construction of roads and a canal in the Knowth-Newgrange area. Jenkins examines the changes in the settlement, landscape and society of the area through the eighteenth, nineteenth and twentieth centuries, including the acquisition by the Irish state of the large mound at Knowth, the programmes of excavation and conservation at the site and development of Brugh na Boinne as a place of mass tourism.

by Kilian Doyle published in the Irish Times, February 2009


A new book on the ancient megalithic site reveals graffiti was a problem over a thousand years ago. Knowth and its Hinterland, the fourth in a series of volumes on Knowth and the wider Brú na Bóinne site, traces the history of settlement and society in the area from the emergence of political power in the 10th century up to the modern era.

Excavations that began at Knowth in 1962 under the direction of Professor George Eogan have uncovered 18 satellite tombs around the great mound. Over 200 stones bearing megalithic inscriptions were found. The latest research details the discovery of a mixture of ogham scratchings and doodles in early Christian script on stones that line some of the underground passages and chambers.

One of the book's authors, Francis John Byrne, professor emeritus of early Irish history at University College Dublin, said the marks were obviously "vandalism or graffiti". It is believed they date from between 700 and 750AD when Knowth underwent a refurbishment and became the royal residence for the Brega kingdom. A number of the smaller satellite tombs around the main mound were destroyed at this time, leaving them open to attack by vandals.

Professor Byrne has described the inscriptions, which contain about 20 names, as "rather artistic". It is not known if the graffiti was the work of a single culprit or if there were several involved. He said they were obviously written by a literate scribe or scribes, who were Irish and not Viking invaders. Most were written the type of long, angular script found in the type in the Book of Armagh, while some were in written in the more rounded characters found in the Book of Kells, he said. Minister for the Environment John Gormley, who launched the book last night, said the discovery of graffiti proves "some things never seem to change".

Knowth is part of the megalithic Brú na Bóinne complex that also includes Dowth and Newgrange. The area is a Unesco World Heritage site. Historical Knowth and its Hinterland is edited by FJ Byrne, William Jenkins, Gillian Kenny and Catherine Swift, with an introduction by Professor George Eogan. It is published by the Royal Irish Academy in association with the Department of the Environment, Heritage and Local Government.