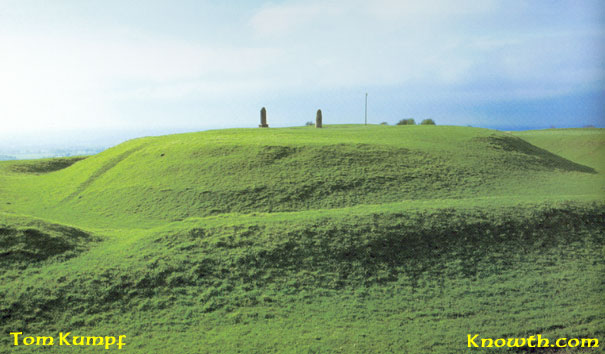 Teamhair is the ancient name given the Hill of Tara. One of the most religious and revered sites in all of Ireland, it was from this hill that the Ard Ri, the High Kings of Ireland, ruled the land. The place was sometimes called Druim Cain (the beautiful ridge) or Druim na Descan (the ridge of the outlook). When walking the path that leads to the top of the hill today, one can easily appreciate why. The long gradual slope eventually flattens at the top for an amazing view of the broad plains in the Boyne and Blackwater valleys below. All that remains of the complex is a series of grass-covered mounds and earthworks that say little about the 5,000 years of habitation this hill has seen.

Just north of the Mound of Hostages, a small passage grave dating to around 2500 B.C., is a large rectangular earthwork that once supported the Great Banquet Hall. Known in Irish as the Teach Miodhchuarta, or 'house of mead-circling' the structure measured 90-feet wide by 755-feet long and was built to serve thousands of guests during times of feast and celebration. Tradition also suggests that the Great Hall housed all the leading knights of Ireland, acted as the ceremonial entrance to Tara, and was the point where all the major roads of ancient Ireland converged.

South of the Mound of Hostages is the King's Rath and Royal Seat. In its center stands the Lia Fail or 'Stone of Destiny'. Clearly phallic in design and form, the stone is said to be one of the four treasures brought to Ireland by the Tuatha de Danann, a gift from the gods that would roar three times when he who would be rightful king stood upon it.

Although the stone has been moved several times, it originally stood beside the Mound of Hostages. The chamber of the mound is specifically aligned to catch the sun at the time of two major Celtic festivals: Samain (Summer's End) on November 1 and Imbolc (The Budding) in early February.

A great fair or feis, was held at Tara at the time of Samain. Lasting three days before and three days after, the feis was an intricate affair, much more than just a week of festive celebration. Here, the ancient laws were recited and defined, new laws were enacted, grievances were acknowledged, and disputes were settled. 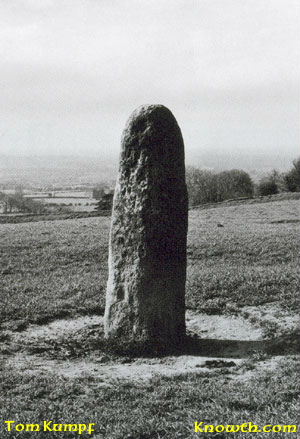 As was customary at all such assemblies, the ancient history was recited before all the people by the king's seanachie, or storyteller, while the many other seanachie carefully monitored his every word. The storyteller could not distort or modify the accounts in the slightest, lest he be subjected to public criticism and humiliation by his highly accomplished and disciplined associates.

This extremely efficient method of confirming and conveying the country's history as a carefully monitored oral tradition was practiced for many thousands of years before the introduction of writing. Even then, the practice did not die. Often hidden behind the veil of folklore, it continued on for many long centuries in response to a Christian church bent on revising what it considered a sinful, pagan past. Hence, the rich history described by Yeats and Lady Gregory was theirs to record only because of people so dedicated as to pass the words on generation by generation, mouth by mouth.

There are so many stories associated with Tara that the difference between fact and fable is all but impossible to distinguish. The kings, for example, may have been the most influential men in the land, but it is doubtful that the kings of Tara ever had complete political control over Ireland. The term 'High Kings' was more symbolic than exact and, except for specific periods between A.D. 400 and 1022, it is a matter of record that Tara was obliged to share power with countless other regional kings and clan chieftains.

Nevertheless, Tara remains the royal seat of romance and enchantment for the Irish. It was here that the great goddess Queen Medb first employed her mystical powers and a vast host of druids to reign over the land. Her rath, some 750-feet in diameter, lies a half-mile to the south of Tara Hill. The young Fionn mac Cumhaill accomplished his first heroic act by killing the evil Aillen mac Midgna, a fairy musician who lulled the people of Tara to sleep and then burned the structure to the ground every Samain for twenty-three years.

Tradition holds that Patrick lit a paschal (Easter) fire on the Hill of Slane in A.D. 433 as an act of rebellion against Loegaire, High King of Ireland, who decreed that no fire should be lit within sight of the Hill of Tara. Patrick's act symbolized Christ's triumph over paganism and, although Loegaire was furious, he sought to meet with Patrick and question him. During the encounter, Patrick killed one of the king's druids and summoned an earthquake to subdue the king's guards. He then used the three-leaved shamrock to explain the concept of the Holy Trinity to the king and his court. Loegaire made peace with Patrick and, although he never converted, the king allowed Patrick to continue his evangelizing. On the eve of Easter Sunday, the local parish priest still lights a bonfire on the Hill of Slane and the shamrock remains the national symbol of Ireland.

Although the High Kings of Tara were normally buried at Brug na Boinne or Newgrange, just to the south of the Royal Seat are the remains of the Rath of King Loegaire. Here the king is said to be buried fully armed in an upright position in order to see any approaching enemies of Ireland. To the north of the Royal Seat are numerous other mounds and earthworks. One of them, as legends go, could be the very place where the head and hand of Cuchulainn were buried following his death at Sliab Fuait.

Text and photographs from Ireland: Standing Stones to Stormont by photographer and writer Tom Quinn Kumpf. A photographic study of the ancient sites of Ireland with notes by the author of events and experiences he had while working on the project.  More ...