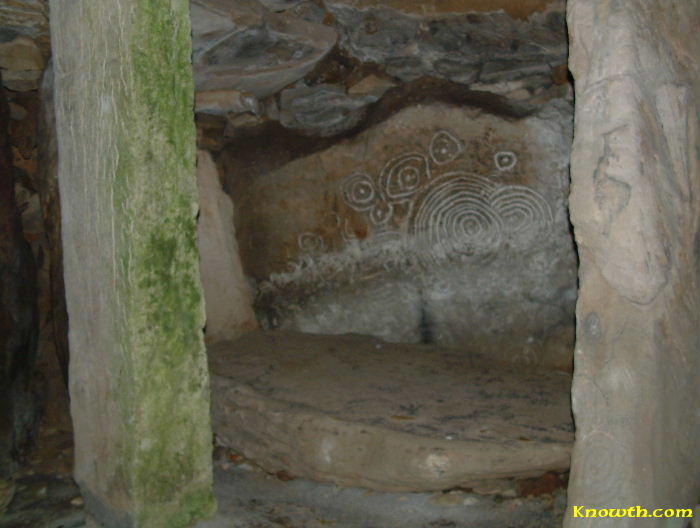 Inside Loughcrew Cairn L, a limestone standing stone is positioned in the chamber. Martin Brennan discovered that the sunrise on the cross-quarter days (early November and early February) illuminates the standing stone.  More ... 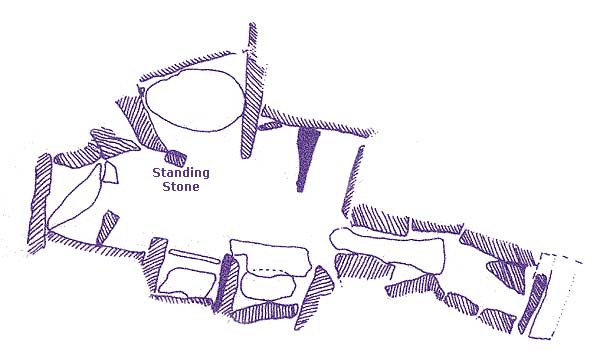 Loughcrew Cairn L was excavated by Eugene Conwell in 1865

After the interior chambers had been cleared of all the loose stones, which had filled them up, on Tuesday evening, 19th September, 1865, in presence of Mr. Naper, Mr. Hamilton, Archbishop Errington, and a number of ladies, we turned up this remarkable stone basin, and beneath it were revealed to view several splinters of charred and blackened bones, with about a dozen small pieces of charcoal lying in various directions.

On carefully picking the damp stiff earth underneath it, we found embedded in it upwards of 900 pieces of charred bones; forty-eight human teeth in a very perfect state of preservation; the pointed end of a bone pin, five and a quarter inches long, and a quarter of an inch thick; a fragment, about an inch in length, of a similar bone pin a most perfectly rounded syenite ball, still preserving its original polish two and three-quarter inches in diameter.

Another perfectly round stone ball, streaked with white and purple layers, and about an inch in diameter; another stone ball, upwards of three-quarters of an inch in diameter, of a brown colour, dashed with dark spots; a finely-polished jet-like object, oval in shape, an inch and a quarter in length, and three-quarters of an inch broad; eight white balls (carbonate of lime), which had become quite soft; but which gradually dried, on exposure, to a sufficient degree of hardness to enable us to take them away in a tolerable state of preservation.

Pick up and return to your accommodation or cruise ship. Suggested day tour: Newgrange World Heritage site, 10th century High Crosses at Monasterboice, Hill of Tara the seat of the High Kings of Ireland and the Hill of Slane where St. Patrick let a Paschal fire in 433  Read More ...