The Stones of Time / The Stars and the Stones 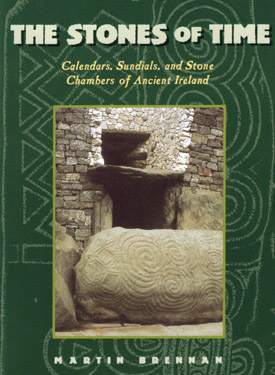 The Stones of Time - Calendars, Sundials and Stone Chambers of Ancient Ireland by Martin Brennan. First published in 1983 as The Stars and the Stones.

Older than the pyramids and predating Stonehenge by at least a thousand years, the stone complexes of ancient Ireland have been extensively excavated and studied, yet they have refused to give up their mystery. Archaeologists have speculated that the chambers were tombs. Art historians have tried to interpret the enigmatic designs painstakingly carved into the faces of the stones. But the real function of these ancient structures can be understood only when the art and architecture are seen to be parts of a unified whole.

Through a combination of careful observation, analysis of the astronomical alignment of the sites, and insightful interpretation of the megalithic symbols and carvings, Martin Brennan argues that the mounds and art are interconnected, sophisticated calendar devices. At critical times of the year, the rising or setting sun projects beams of light into the inner chambers of the mounds, illuminating specific images carved on the stones. Those images seemingly abstract wheels, spirals, and wavy lines suggest provocative new insights into their makers' understanding of celestial cycles and the importance of those cycles in human affairs. Purchase at Amazon.com or Amazon.co.uk


Introduction to The Stones of Time

The River Boyne takes a spiral course as it meanders up from the plains of Kildare, winds its way through Meath and takes a curious bend before emptying into the Irish Sea. The bend in the river encloses a picturesque area dominated by three large stone structures known as megalithic mounds and named Newgrange, Knowth and Dowth. These are strategically positioned on ridges, appearing above a landscape dotted with smaller mounds, earthworks and standing stones.

The Boyne Valley complex continues to be an imposing and impressive feature of the landscape today, as it was when erected over five thousand years ago during the age of stone. It belongs to the Neolithic period and its major structures were completed sometime between 3200 and 3700 BC according to radiocarbon dating. This places the mounds among the world's oldest remaining buildings. Another striking feature has only recently become known. One of the mounds in the complex, Newgrange, was found to be aligned to the position of the rising sun at winter solstice, the shortest day of the year. The earliest reports of this event were not taken seriously, but in time the evidence proved overwhelming - Newgrange was a large-scale solar construct, intentionally designed and of a type previously unknown.

The recognition that the long passage within the mound at Newgrange admitted a narrow beam of light illuminating the central chamber at midwinter added an entirely new dimension to Boyne Valley studies. There was no doubt that the light made its appearance every year in spectacular fashion, but how could this discovery be reconciled with conventional archaeological theories regarding the purpose of the mound? Newgrange was and still is considered to be a giant tomb, yet the new information tended to support the alternative theory that such megalithic structures were designed for astronomical purposes.

My own field of research involves yet another intriguing feature of the mounds. The complex of sites in the Boyne Valley contains, painstakingly engraved in the chambers and passages and on the kerbstones surrounding the mounds, perhaps the largest accumulation of Neolithic art in the world. My main long-term project was, if possible, to explain the meaning and purpose of this vast collection of enigmatic abstract art. By the end of 1979, after ten years of research, I had already come to some preliminary conclusions.

The alignment of Newgrange to the midwinter sun was evidently a major feature, central to the concept of the mound. I also concluded that the art contained in the mound must directly or indirectly relate to this central feature. If this relationship between the mound and its art was correct, it would imply that similar mounds containing similar art would also feature astronomical alignments.

From the very beginning I could not regard Newgrange as a unique solar construct. Its size and use of complex techniques suggested that there must have been preliminary models upon which the scheme had been based. I was also aware that unless comparable Neolithic devices could be found elsewhere, very little could be determined about the precision with which Newgrange had been laid out, or whether or not it represented a systematic method of time reckoning.

The line of enquiry I was pursuing could be verified only by systematic field research embracing all the major mounds in the Boyne Valley. In order to help eliminate possibilities of coincidence, another large complex of mounds situated in the Loughcrew Mountains would also have to be investigated. The Loughcrew complex is second only to that of the Boyne Valley in its size and in the quantity of megalithic art it contains. Together the two complexes provide the great majority of all megalithic art in Ireland. Eventually the project would expand to include most of the Irish sites containing megalithic art.

The mysteries of the art could be explained only in terms of the mysteries of the mounds themselves, especially the way they interacted with light. The original art research project was therefore expanded to include an archaeo-astronomical investigation. Although I had failed to interest archaeologists in my ideas, a fellow artist and amateur astronomer, Jack Roberts, saw a certain logic in my reasoning and was keen to test my ideas in the field.

Our field research began in late 1979 at Newgrange, where we observed the midwinter sunrise, and ended one year later in the chamber of nearby Dowth, where the rays of the setting sun projected a beam of light at winter solstice. During 1980 we had made comparable solar observations at over thirteen megalithic sites. We gradually came to realize that the mounds were indeed accurate sun chronometers whose structures are a celebration of light and measurement. We also discovered a clear and distinct link between megalithic art and the astronomical events that animate megalithic structures, giving them meaning and function.

The story of our discoveries is the subject of this book. But many researchers before us had, in varying degrees, anticipated or at least suspected an astronomical significance, both in the alignments of the mounds and in the signs and symbols that make up megalithic art: their story should also be told. Even before these comparatively modern visitors, however, Celtic history and tradition alike echo the high prestige of the mounds. Locked away in Gaelic manuscript and lore are fragments of evidence which show that these mounds have captured the imagination and admiration of generations of peoples, extending down through ages of time. 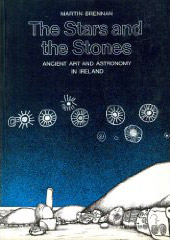 The Stones of Time was first published in 1983 as The Stars and the Stones.

Martin Brennan used a different kerbstone numbering system at Knowth to the George Eogan K1 to K127 system. He used a system based around North, South, East and West, see comparison table. 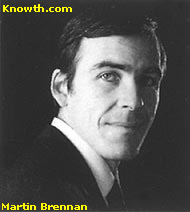 Martin Brennan trained in visual communication at Pratt Institute. He has travelled extensively in Mexico where his interests in prehistoric rock inscriptions, ritual, and traditional art developed.

Spending more than a decade in Ireland engaged in active research on megalithic art, he tapped into some of the earliest methods of recording numbers and the fundamental beginnings of writing, and reported these startling discoveries in his critically acclaimed 'The Stars and Stones', later reissued as 'The Stones of Time'. He is also the author of Hidden Maya. He lives and teaches in Boulder, Colorado.