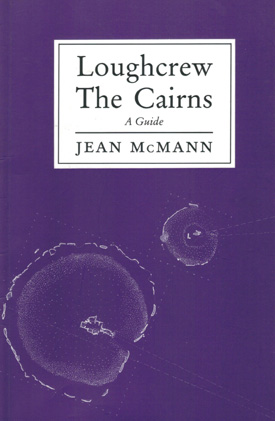 Loughcrew The Cairns a Guide by Jean McMann Introduction to the cairns at Loughcrew in County Meath, Ireland. To walk the hills of Loughcrew is to be surrounded by traces of a least five thousand years of the past.

Preface to Loughcrew The Cairns a Guide

This guide is intended as an introduction to a little known yet uniquely important landmark, the Neolithic cairns at Loughcrew in County Meath, Ireland. The site is a key monument not only in the history of Ireland, but in the world's history of architecture. It lies about two miles east of the north midlands town of Oldcastle, fifty-two miles north-west of Dublin.

To walk the hills of this place is to be surrounded by traces of at least five thousand years of the past. The visitor can explore the extensive, unrestored ruins of one of Ireland's four largest passage tomb cemeteries, and at the same time view a 360 degree panorama of the Irish countryside. Loughcrew is also rich in the architectural remains of later periods: Iron Age ring forts, medieval crosses and castles, and the sacred and secular buildings of later centuries. This guide is the first twentieth-century publication devoted exclusively to Loughcrew, and includes the first complete plans of the major cairns.

The historical and architectural information in the book provides the reader with factual evidence; I have also included ideas about the use and significance of the site. Spellings are standardised to modern conventions, except when quoting directly. Most important are the maps and plans, designed to help the reader find and identify details of the monuments. I hope that visitors will think of the cairns not only as beautiful stones in the landscape, but as revolutionary works of art. 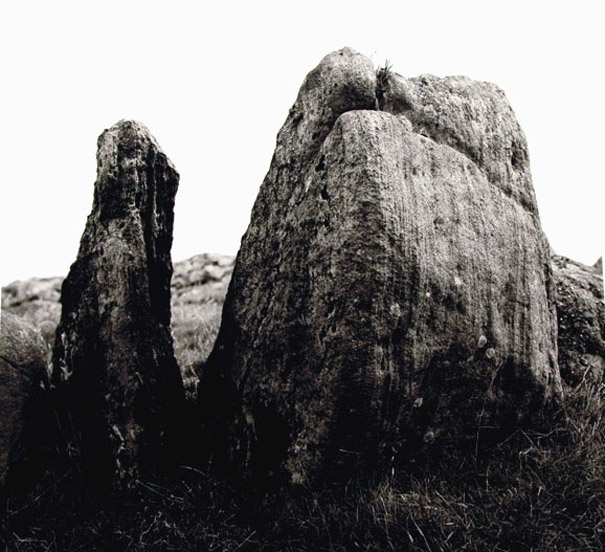 Seven Stones at the Hill of the Witch: photographs by Jean McMann
Edition of 100, published in 2005 by Jungle Garden Press.

Seven Stones at the Hill of the Witch: photographs

9.5 x 9.5" with 11 sheets including title and colophon laid in a clamshell box. Box covered in green raw silk made by John Demerritt and Kris Langan. Letterpress text printed by Marie Dern. The 9 x 9" carbon-based pigment prints were made by Urban Digital Design in San Francisco.

This series of seven portraits of Irish kerbstones were photographed by Jean McMann. Kerbstones are part of a prehistoric ceremonial centre about 50 miles northwest of Dublin at a place called Loughcrew of Sliabh na Calli (the hill of the witch or hag). Along the crest of this hilly ridge are ruins of at least 35 stone structures now called cairns or passage chambers built around 5,500 years ago during the Neolithic Period.

These cairns and the symbols carved in stone by their makers have been the primary subject of Jean McMann's work as a photographer and scholar ever since she first visited Loughcrew in 1976. Her dissertation for her PhD in History of Architecture from the University of California at Berkeley focused on the plans and history of the site. But her most powerful means of connection has always been the camera.

Jean McMann: "I photographed these kerbstones again and again from 1989 to 1992, lying behind my splayed tripod in the wet grass of Irish summer mornings. They stand on the rest of a hilly ridge now mostly called Loughcrew, about fifty miles southwest of Dublin in county Meath, Ireland. For centuries the place was known as Slieve na Callighe or Sliabh na Cailli (the hill of the witch or hag). The stones are part of a Neolithic ceremonial centre, a site of veneration and pilgrimage built sometime around 5,500 years ago to house and honour the dead. It also may have served as a tribute or means of connection to the sun, moon, stars, as well as to the earth and its seasons. Together with sacred architecture worldwide, the many stone monuments in ruins at Loughcrew speak to us of the purpose and meaning of human existence - our births and deaths, the deeds and events of our lives over time. Deep-rooted and comforting, these stones represent the power of human imagination and our connection to the cosmos."

Riddles of the Stone Age: Rock Carvings of Ancient Europe by Jean McMann. Published in 1980 by Thames & Hudson; London.