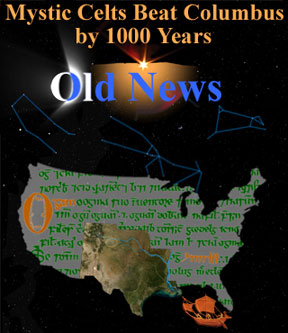 Rock art discoveries over the past generation demonstrate Christopher Columbus was a relative late-comer among European sailors who explored North America. The exciting evidence, dated by nuclear chemistry, is carved on the remote sandstone cliffs and within caves of the rugged Oklahoma panhandle and southeastern Colorado canyon country. Written messages in an ancient Celtic alphabet known as Ogham survive in proximity to the more abundant imagery of the wonderful petroglyphic art of the Plains Indians. "Old News" documents the passion by advocates of pre-Columbian, transatlantic contact and the stunning intolerance of most professional archaeologists to seriously consider the evidence.

Particularly compelling are archaeoastronomical links to the Old World. Rock art shadow plays that occur only at equinox sunrises and sunsets, a Lughnasad cross-quarter dawn and a summer solstice sunset are all accompanied by predictive Ogham inscriptions. Additionally, engraved constellation maps tie these remarkable finds to distinctively Indo-European understandings of the Zodiac in ancient times.

The "Noble Twins" inscription, for example, memorializes 3 planets traveling through the Gemini Constellation, a rare and noteworthy event for ancient sky watchers, observed just before dawn on Lughnasad, August 8, 471 CE. Woven into some of the star maps are secrets of the initiates in an arcane, astral religion known as Mithraism that pre-dated Christianity. Mithras and his entourage are symbolic participants in a revealing shadow-cast a virtual ancient motion picture at equinox sunset in Oklahoma's Anubis Cave. Unless professional anthropologists take an interest, all these threads to the past may simply be forgotten.


Statement by the director

Some people have asked me why windmills play such a scenic role at the beginning of Old News and again, later, as a background for its credits. If you travel U.S. 287 through southeastern Colorado, there's not much to break the monotony of the windswept landscape. But on a ridge between Lamar and Springfield is a monstrous, modern wind farm for generating electricity. It wasn't even on the drawing boards in the mid-1980s when I filmed an earlier documentary, History on the Rocks, but even then I had entertained the idea of including scenes of an old fashioned, water-pump windmill to underscore the hardships and remoteness of life on the high, desolate plains.

Artistically, scenes of both the old and the new windmills form a nice introductory contrast of our pervasive high-technology lifestyle to the low-tech culture of our distant ancestors, whose imaginations were, arguably, much richer. Yet, their accomplishments certainly must not be diminished because their tools were cruder than ours. As Gloria Farley underscores in our epilogue, "Why do we think that people who were ancient, were primitive?" In the 21st century we really do stand on the shoulders of giants. I have a more subtle reason for featuring windmills, however. The relativity can be grasped within some of the unsung lyrics of our theme, "The Windmills of Your Mind," written by Alan Bergman, Marilyn Bergman & Michel Legrand, published by EMI U Catalog Inc., (ASCAP)


Like a clock whose hands are sweeping
Past the minutes on its face
And the world is like an apple
Whirling silently in space
Like the circles that you find
In the windmills of your mind.

Like a tunnel that you follow
To a tunnel of it's own
Down a hollow to a cavern
Where the sun has never shone
Like a door that keeps revolving
In a half forgotten dream
Or the ripples from a pebble
Someone tosses in a stream.

Like a circle in a spiral
Like a wheel within a wheel
Never ending or beginning,
On an ever spinning wheel
As the images unwind
Like the circles that you find
In the windmills of your mind.


The legendary dreamer Don Quixote tilted at windmills, questioned authority, challenged the very perception of reality, as does What The Bleep Do We Know!?. Don Quixote's tenacity is the sort of persistence needed by anyone who suggests an alternate theory not welcomed by the establishment. William Adams' haunting baroque oboe rendition of "The Windmills of Your Mind" sets a perfect tone for an idealistic quest to rewrite history.

Inspirational guides and muses are indispensable in priming creative juices. Just weeks before his death, Bill McGlone initiated a resumption of telephone calls to me. We hadn't really spoken in about a decade. He asked for a batch of VHS dubs of my 1985 KRMA documentary History on the Rocks to help in publicizing the upcoming release of a book he co-authored, Archaeoastronomy of S.E. Colorado and the Oklahoma Panhandle. Bill also implored me, as he had many years earlier, to start work on a sequel based on the rich trove of evidence forthcoming since the mid 1980s. Bill died of a sudden heart attack in his home in La Junta at the end of January 1999.

Michael Fox who lives near Fourknocks, County Meath, Ireland runs Knowth.com and BoyneValleyTours.com. I operate Archaeoastronomy.com, and although we have never met, we share an interest in Irish megalithic tombs, particularly Newgrange, Knowth, Dowth and the Loughcrew sites. Michael and I exchanged occasional emails in 2004. But his video gift of the spring equinox 2005 light and shadow play shot in the interior of Loughcrew Cairn T arrived in my mailbox somewhat unexpectedly, but coincidentally, just as we were about to finish piecing together a significantly relevant segment of Old News on archaeoastronomy. Michael's contribution is a key element in our story, but just barely made inclusion.

TransVision hired intellectual property attorney Deborah Shinbein of the Denver law firm Faegre & Benson, LLC, to prepare copyright papers in November 2005 and help us assure all clearances were in proper order. We were in the final online edit at Denver High Def and wanted to wrap the project by Thanksgiving or early December at the latest. Deborah red-flagged a series of scenes involving a number of attendees at the CU Boulder presentation of November 16, 2004, for which we had not obtained release forms.

The one person in the audience who asked a question on camera, indeed refused us permission when I contacted her by phone, forcing us into an 11th hour exterior facilities shoot to replace the uncleared footage. Our edit schedule was tight, and a major snowstorm was on its way within 24 hours, predicted to blanket Boulder with white cover that probably wouldn't melt away for a week or more. The morning of November 14, 2005, was, as TV weathermen are fond of saying, "unsettled". Clouds were rolling in and light rain and sleet were falling as I made my way up the Boulder Turnpike from metro Denver. I made a beeline for the Flagstaff Mountain overlook above the campus, knowing I had no time to spare.

Just as I finished setting up the camera, the wind subsided and a break in the clouds let the sun in, just enough to highlight the red-tile roofed campus buildings in the foreground leaving the distant landscape to the east, appropriately dimmed. This providential natural lighting could not have been ordered any better. Later in the afternoon, the snow fell hard. And the remainder of the week, when we were scheduled to be in edit anyway, would not have afforded such outstanding lighting as we enjoyed, briefly, on that Monday morning.