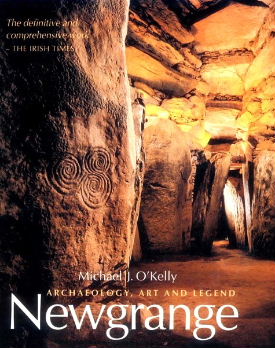 An account of the major excavation of Newgrange which was carried out by Professor Michael J. O'Kelly between 1962 and 1975.

In the book Professor O'Kelly presents the full results of his excavations at Newgrange between 1962 and 1975. Every stage in the excavation, interpretation and restoration of the site is described and illustrated with additional contributions from Claire O'Kelly, who collaborated in her husband's work at Newgrange from its inception.

Newgrange is unhesitatingly regarded by the prehistorian as the great national monument of Ireland; in the words of the late Seán P. Ó Ríordáin, 'one of the most important ancient places in Europe'. Its special importance has been widely realized since the early description by Edward Lhwyd in 1699, and each generation finds in it something new and interesting. The widespread realization in recent years that the very early 'megalithic' architecture of western Europe is something notably and essentially European, owing little or nothing to the Near East, has only served to heighten our admiration for some of these great and early constructions, of which Newgrange is undoubtedly one of the very finest.

Our own generation has been particularly fortunate that, since 1962, this important site has been the subject of investigation by Professor O'Kelly, ably assisted by his wife Claire. To them we are indebted for a number of important discoveries and conclusions which are set out in full here. Indeed in the face of so much new information, it is interesting to look back to the pessimism which prevailed nearly two centuries ago, to the gloomy view that very little could ever be known about it. In his Tour in Ireland, published in 1807, the distinguished English antiquary, Sir Richard Colt Hoare, wrote of Newgrange:

I shall not unnecessarily trespass upon the time and patience of my readers in endeavouring to ascertain what tribes first peopled this country, nor to what nation the construction of this singular monument may reasonably be attributed for, I fear, both its authors and its original destination will ever remain unknown. Conjecture may wonder over its wild and spacious domains but will never bring home with it either truth or conviction. Alike will the histories of those stupendous temples at Avebury and Stonehenge which grace my native country, remain involved in obscurity and oblivion.

Now we know so very much more. In the first place, as reported here, the mound and its contents have been reliably dated. The 'uncorrected' radiocarbon date of around 2500 bc must be the equivalent, after the calibration of the radiocarbon time scale (using the corrections afforded by tree-ring dating), of a date in calendar years of about 3200 BC. There can be no doubt, therefore, that Newgrange is older than Stonehenge, older than Avebury, and indeed older by several centuries than the pyramids of Egypt.

This early construction highlights still further the great fascination of the carved stone decoration of the Boyne tombs, and of Newgrange itself. Mrs O'Kelly's corpus of the art from this site makes an important contribution here. The precise purpose of this decoration is still a matter for discussion, and great interest was aroused by Professor O'Kelly's discovery that some of the stones were decorated on surfaces which could never have been visible to the visitor to the tomb: their secret was revealed only in the course of excavation and restoration work. Here the case is convincingly argued that these stones were not re-used from some earlier monument. Moreover the care with which the construction was planned and executed does not support the view that these carved surfaces were obscured by accident or by the incompetence of the builders. Was this hidden carving then the consequence of some secret piety of its makers, invisible to mortal eyes, but present nonetheless for eternity?

The most remarkable discovery reported here came about unexpectedly in 1963, when the investigation of a seemingly anomalous slab led to the recognition of the 'roof-box', a carefully constructed aperture above the entrance. It is so situated that at midwinter's day the rays of the rising sun penetrate the full length of the entrance passage, and reach into the chamber itself. Whatever one's scepticism for some of the claims made on behalf of 'megalithic astronomy' or of 'astroarchaeology', it is difficult not to see this as a deliberate and successful attempt to incorporate the midwinter sunrise as a significant element in the planning and use of the monument. This arrangement constitutes one of the very earliest astronomical, or rather solar, alignments ever recorded, earlier by far than those of Stonehenge and the other British stone circles and standing stones. It still works today, despite the small changes over the millennia in the earth's position relative to the sun, and according to Professor O'Kelly will continue to do so as long as Newgrange continues to stand.

This volume constitutes the final and definitive report of these excavations and researches, with studies by a number of specialists given as appendices. But it has turned into something very much more than simply an excavation report: into a review of the history of research at Newgrange, a survey of its place in prehistory, and a corpus of the remarkable carvings which embellish the stones of this 'cathedral of the megalithic religion'.

As discussed in chapter 12, former generations held that Newgrange, and those other great monuments of the Boyne valley, Knowth and Dowth, were the work of colonist-builders, representing the end of a line of devolution which had begun in the Mediterranean world, starting perhaps with the impressive stone tombs of Mycenae. Now we know that it is older by far than these Aegean comparisons, and that Newgrange is not the work of immigrants already greatly skilled in architecture, but instead the product of a more local evolution, from simple to complex. Some at least of the questions so pessimistically posed in 1807 by Colt Hoare can now be answered, and we can instead share the view of another early antiquary, George Petrie, and, on the basis of the careful researches reported here, with him agree 'to allow the ancient Irish the honour of erecting a work of such vast labour and grandeur'. 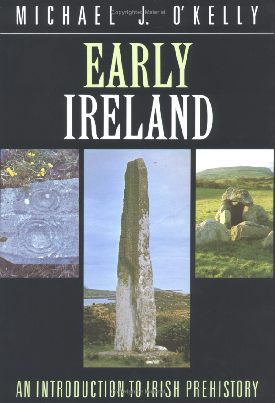 Early Ireland offers an authoritative introduction to the riches of Irish prehistory - a span of eight thousand years from the end of the Ice Age to the first centuries of the Christian era.

The book provides a clear account of the development of Irish society from its beginnings as a postglacial culture of hunters and gatherers, through the glory of its golden age in the second millennium BC, to the technological advances stimulated by the discovery of iron and, in the last centuries BC, the growth of a Celtic art style of unrivalled power and individuality.