A taste of the unexpected: subverting mentalités through the motifs and settings of Irish passage tombs.


Loughcrew, or Slieve na Calliagh, is one of Ireland's most magnificent and abounding archaeological landscapes. It is located at the western end of Co. Meath and incorporates a complex of passage tombs distributed across the four neighbouring hilltops of Carnbane West, Carrickbrac or Newtown, Carnbane East and Patrickstown, in an area measuring 3 km from east to west and 600m from north to south (Fraser 1998, 206; Cooney 2000a, 159).

On a clear day the panoramic views from the summits of these hills make it possible to see the Wicklow Mountains, the Mournes, Slieve Gullion and the mountains to the north-east (Shell and Roughley 2004, 22), giving a view of Ireland from sea to sea, about its narrowest part (Conwell 1866, 355). Previous accounts of these passage tombs have addressed individual motifs and how they are related to burials and deposits, the entire complex with the locations and orientations of specific passage tombs, and movements of people through and around the monuments (e.g. Herity 1974; Cooney 1990; Thomas 1992; McMann 1994; Shee Twohig 1996).

This paper aims to build upon these previous ideas of landscape context and motif location with physical and visual engagements in order to develop a further argument that includes the possible sequences, differences and repetitions that are being performed by the passage tombs on Carnbane East and West.

I draw upon the Loughcrew passage tombs and settings to explore potential relationships created by the engravers and spectators of the visual images. The passage tomb motifs will be analysed as a flux of images and technological illusions (or the illusion of created technologies, such as an engraved motif or built passage tomb) that may have represented and influenced some Irish Neolithic societies. Although there is indication of some people continually interacting with the summits of Loughcrew from the Mesolithic through to the Neolithic, there is currently no settlement evidence available.

The passage tombs and engraved images were therefore probably removed from the context of daily life, possibly thought of as being placed in a liminal zone (van Gennep 1960), involving a strenuous physical exertion in order to reach the summits and the passage tombs (Fraser 1998, 212). Contact with the passage tombs may have been temporal and in some instances physically and emotionally hazardous, potentially acting as some form of social integration or separation (Turner 1982; Foucault 2002).

It is suggested that both the sequential application of images, the topography of the Loughcrew summits and the passage tombs themselves develop visions, gazes and glances that are anchored in the present, with the present being a 'temporally extended field' of retentions of the past in the present, as well as being extensions of the present into the future (Gell 1998, 239-40). Following Gell (1992), I review the Loughcrew evidence and consider how the repeated alteration of the sites in the Neolithic (their 'now'), among a society, was the result of the ways in which people continually renewed their beliefs in and of the world.

By repetitively interacting with the passage tombs, some Irish Neolithic people were devoting effort, play and 'work', which may not be separate operations (see discussions in Ingold 2000, especially chapter 17), to be able to frequently ascertain the currentness of beliefs about events. Although we can never know what these beliefs were, we can detect themes, possible perceptions and repetitive actions; it is through some of these elements that I will construct possible narratives. Furthermore, these perceptions are always 'anchored in the present' (Gell 1992, 173) and in turn informed by a person's horizons, that is the limits of their experiences or outlook (Hirsch 2004, 37) and the residues of their material culture. Appreciating this allows us to further consider the possible worldviews of others.

Recently, Thomas (1990; 1992; 1993; 2001) has explored the view that distances and explorations into other worlds and spheres of knowledge are expressed not only through the internal architectures of the Loughcrew passage tombs, but also via the locations of specific motifs. By moving further into the inner areas of the passage tomb, the spectator is challenged with increasingly managed movement through more complex spatial divisions (Thomas 1990). This is argued to occur in order to facilitate the accumulation and manipulation of communal and 'ancestral' authorities (Thomas 1990, 175).

By incorporating textual analogies, Thomas proposed that that the visual motifs acted as symbolic media by which approved knowledges could be 'read' by and aimed at particular members of society, possibly as part of an 'interpretation of reality' (1992, 143, 146, 154). The differing motifs on individual stones are described as being for different people or people at different temporal stages of a particular performance or practice (Thomas 1993, 87). Thomas (1992, 146, 154) does, however, stress that the interpretations and meanings of the motifs may have been fluid, multiple, and capable of change as a result of the ambiguity inherent in abstract images (see also Bradley 1995).

In this discussion the passage tombs, their settings and their motifs will not be regarded as static, but rather 'animate', fluid and transformative. This avoids the paradox created when prehistorians utilise text to understand a Neolithic world in which text did not exist. Better comprehensions of how some Irish Neolithic people perceived their world undoubtedly derives from focusing on what they had seen and what they made of what they had seen (Bloch 1998). Taking my lead from Bloch (1995) and Gell (1998), this paper abandons interpretations founded on unambiguous visual meanings, definable symbolism and decipherable textual codification (see also Dundes 1980; Gell 1999; Gottdiener 1995; Holly 1998). Instead, I seek out alternative metaphors (cf. Thomas 1998) and 'modes of attention' (Baxandall 1997, 135), such as the carnivalesque. We should endeavour to see their 'world-as-a-picture' in flux, rather than their 'world-as-text' in stasis (Mitchell 1994, 16).

To achieve this, detailed accounts are made of episodes and temporalities, multiple meanings and overlapping phenomena. The superimposition and location of motifs is reconsidered within a carnivalesque framework. This perspective is pregnant with conflicts, tensions and paradoxes, all of which allow a more complex understanding of the immediacies and non-uniformities of overlain visual images engraved in passage tombs and their placement within an environment.

The Loughcrew cairns are located on an east-to-west axis, with an almost linear structure, with smaller tombs arranged near larger focal ones (see plans below). In this respect, they can be compared to the Boyne Valley, Co. Meath, sites (Cooney 1990).

There are currently over 30 passage tombs in the Loughcrew complex and many of these are engraved with motifs, particularly on the internal structural stones and occasionally on the kerbstones. Patrickstown Hill is thought to have had a further 21 cairns, but that they were totally demolished with no remaining traces before 1864 (Conwell 1864, 48; Coffey 1912, 78; Brennan 1983, 69).

Shee Twohig (1981, 94, Figs. 213-41; see also Frazer 1893) recorded over 100 decorated stones (124 decorated surfaces), although the original number was probably higher, and has argued for a distinctive Loughcrew style of imagery. More recently, a Japanese expedition employed a modern rubbing technique to produce a new record of the Loughcrew motifs, but this unfortunately still remains unpublished (O'Sullivan 1993, 30). 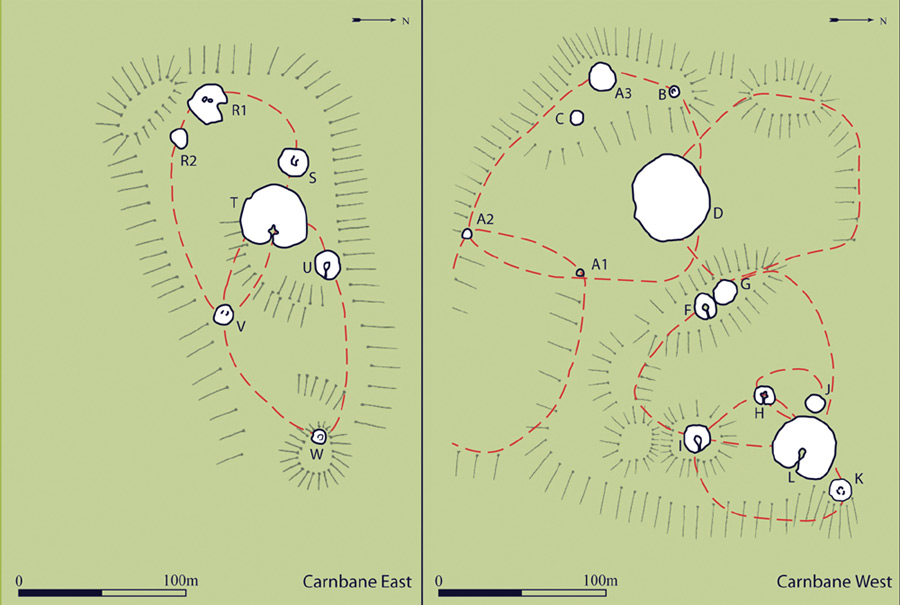 The possible focal areas (indicated red dash line) as proposed by Fraser on Carnbane East and West. Terrain indications are an approximation only. (adapted from Fraser 1998, Figs. 8 and 9).

The topography at Loughcrew consists of a dominant elongated ridge orientated south-west/north-east on the interface between the areas of the Boyne/Blackwater and Shannon river systems. This location between rivers is also comparable to the Boyne Valley sites. To the south and west of the hill are the comparatively low, undulating, limestone plains of Co. Meath and Westmeath, and to the north slate rocks occupy the low areas around Lough Ramor (Conwell 1864, 43). The passage tombs are situated along the curving spine of the ridge; with the central component of the complex residing above the 214m contour line (Cooney 1987; 2000b).

The passage tombs are centred on moderately flat-topped summits and are again similar to the Boyne Valley passage tombs in that the smaller sites are clustered around larger tombs. The undulating, steep and flattish features of the topography have been argued to directly affect and influence an individual's visual experience through its contrast and transformation (Fraser 1998, 212). The flat features of the summits are only apparent when one reaches the tops of the hills. It is interesting to note that most cairns are located on the margins of the summits, although exceptions do occur (e.g. Cairn D and T). This creates a visual 'island' whereby the internal spaces are framed by the steeper banks on the periphery of the summits and by the cairns, which in turn physically and visually block out the external spaces (see again plan above).

Fraser has suggested that these topographical and artificial features possibly demarcated eight focal areas or as I have proposed 'islands' within the Loughcrew Hills (1998, 212-14; see plan above). The summits form 'islandscapes' (Cooney 2004, 145), special places where striking features of the land are embellished and special material culture created and used to enhance links with the lived-in-world and 'other' worlds, whilst also delineating boundaries to these liminal places (Bradley 2000, 36). After Whittle (2004), we might therefore describe these aerial locales as 'islands-that-float-to-the-sky'. Indeed, some Neolithic people may have regarded mountains and hills as part of the sky rather than just the land (Watson 2004, 60).