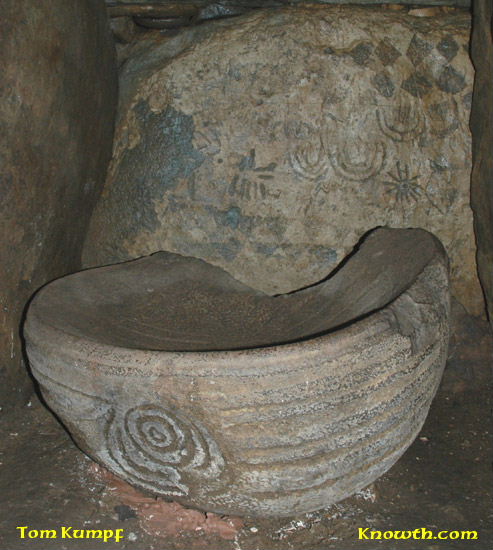 The basin stone is in the right recess of the chamber, orthostat 54 the stone at the back of the recess is richly engraved with symbols.

The Eastern passage and chamber was re-discovered in 1968 by the archaeologist George Eogan, he describes the event as follows. 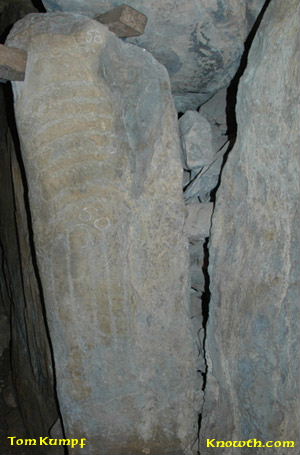 "I moved along the passage, which was a metre wide and slightly more in height. After a couple of metres, obstructions arose, due to a downward sloping capstone and inward leaning orthostats. Having got past these, we came to a well-preserved stretch, but soon had to go on hands and knees again along the stone-littered floor. Farther on we could again stand upright. In this area was a cracked capstone highly decorated with chevrons, and in addition orthostats on both sides now had megalithic art.

But this was only the beginning of many stunning features that still awaited us. We continued our exploration, rather impatiently because of more hindrance caused by inward leaning orthostats. These touched each other at the top, and a void above had dry-stone walling above them.

I now thought that the passage consisted of a two-tier structure, and in my excitement and probably not considering the dangers, I climbed up to the “upper” passage. In fact I was now walking along and over a spread of cairn derived stones. This upper “floor” was above the tops of the orthostats and it sloped gradually upwards. It suddenly came to an abrupt halt, and I felt as if I were suspended in mid-air!. But still not suspecting what might exist before me, I flashed my lamp around. And there was an astonishing sight: a great space with corbelled sides narrowed beehive fashion to a single closing slab at the top.

That was only part of the structure. When I flashed the light downward, what I saw was even more remarkable, a great chamber with a rounded ground plan. I descended into the chamber, how I did so I cannot think, but I must have jumped two metres or more from the top of the orthostats. The chamber provided further excitements. Two side recesses and an end recess opened off it, making it cruciform in plan, and the orthostats as well as some of the overlying corbels were elaborately decorated. One of the side recesses had a portal-like arrangement consisting of two tall jambs again with decoration. I entered the recess. There was more art, but something even more exciting: a large stone basin over a metre in diameter, ornamented on the outside with parallel horizontal scoring and on the inside with arcs and rays." 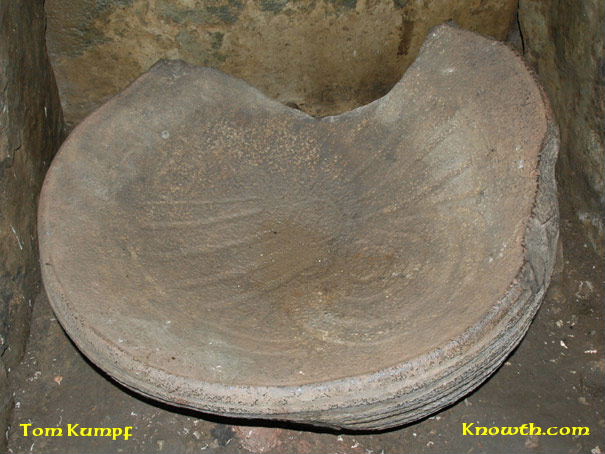