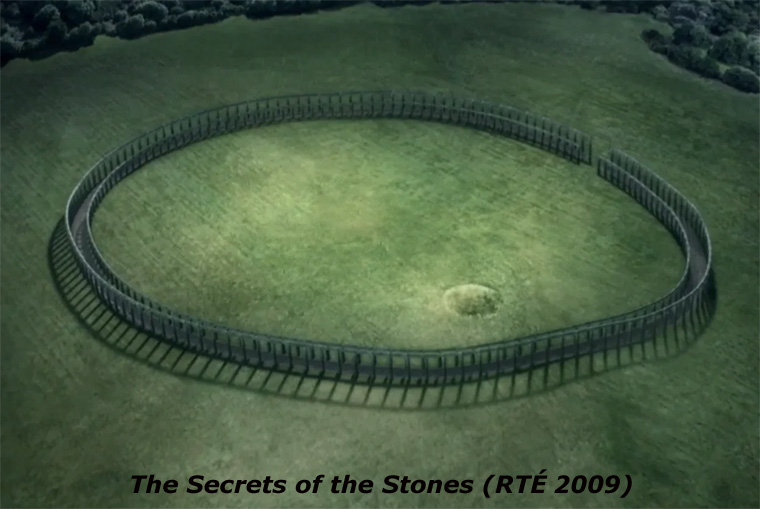 Ireland's Stonehenge, a 4,500-year-old structure at the Hill of Tara in Co Meath, has been re-created by archaeologists and computer-graphics experts. They have built a representation of a huge, wooden monument that appears to have been used for inauguration ceremonies and pagan burials of Ireland's high kings.

Underground remains of the structure were discovered by soil x-rays of the hill, which has been at the centre of an international dispute because of its proximity to the new M3 motorway. The model, to be shown on an RTE television documentary this week, was created using information gathered from studying a ditch, six metres wide and three deep, cut into the bedrock of the hill and enclosing the Mound of Hostages, an ancient passage tomb.

Study of the remains of tree trunks have prompted scientists to conclude the hill was once surrounded by a "wooden version of Stonehenge" that would have been 250 metres in diameter, a "massive scale" similar in size to Croke Park.

Archaeologists believe elaborately decorated timber posts and crossbars rose out of the ditch and surrounded the tomb, which is believed to be Tara's oldest monument. It is estimated the mound was raised in about 3,000BC, making it a contemporary of Stonehenge, the ancient monument in the English county of Wiltshire, and the pyramids of Egypt.

Tara was the coronation place of the country's pre-Christian kings. A pillar stone, the Lia Fail, originally stood at the northern end of the Mound of Hostages and legend had it that when the true king of Ireland stood on this phallic symbol, it would roar.

Robert Vance, a historian who worked on the two-part RTE series, entitled Secrets of the Stones - Decoding Ireland's Lost Past, and the author of an accompanying book of the same name, said there are a number of theories about what the wooden henge was used for.

"Part of the inauguration of new kings involved walking to the banqueting hall, which was really just a low subterranean channel, and passing the tombs of their forefathers," Vance said.

"Perhaps they were then made kings in the centre of that timber circle. But there's also a chance bodies of kings were left within the timber structure to decay. In some excavations, bones of birds were found as well. So it's possible \ took place there, in which winged raptors such as eagles were used to deflesh the body. Pagan people of similar beliefs in native America and Polynesia thought that using birds to pick away at the body would allow the soul to become free."

Using high-definition, computer-generated imagery, a vision of the circular arena at the Hill of Tara was created for the documentary. It posits catastrophic events 4,000 years ago may have caused a change in our ancestors' beliefs.

At around this time, there is evidence Ireland's passage tombs were abandoned in favour of "new monuments and new gods" and people were never buried in them again. One theory is that a long spell of bad weather could have led people to change their beliefs.

According to studies of ancient trees preserved in Ireland's bogs, a growth pause caused by climate change occurred at this time, suggesting that some catastrophic event might have left people in fear.

Another theory is that a volcano in the 6th century may have frightened pagan Celts into believing in "new" gods because of the weather changes caused when the dust reflected light and heat away from the Earth.

Vance believes, however, that the event that led people to change their beliefs was more likely a comet during the Bronze Age, which partly disintegrated and sent fireballs and flaming debris across the sky.

"We see such comet debris as shooting stars in the night sky. To our ancestors, these were terrifying heavenly signs," he said. The comet would also have triggered a dust veil that caused temperatures to plunge. "The old-style temples like Newgrange weren't powerful enough to compete with this new object in the sky," according to the documentary.

"It was enough to make these ancient people question their very beliefs. Did the prehistoric passage tomb builders abandon their religion in the face of something they couldn't understand, something that nearly wiped them out?"

In February, Tara was included in a list of "must-see" endangered sites by a magazine published by the Smithsonian Institute, one of America's most influential museums. The site was equated with the Church of the Nativity in Bethlehem.

Tara has also been nominated for inclusion as a UNESCO World Heritage site, and TaraWatch, a pressure group, claims the M3 should be re-routed as a result.

The National Roads Authority says work on the M3 is ahead of schedule and it could be finished before the July 2010 deadline. "The existing road to Navan is even closer to the Hill of Tara, and the new motorway won't be seen from the hill, so it doesn't visually impinge on it," Vance said.

Wood you believe it? Stonehenge find at Tara

Scientists have unearthed what appears to be a mammoth wooden version of the famous Stonehenge monument at the Hill of Tara.

In a revealing new RTE documentary, many theories and insights into the country's prehistoric past and 150,000 ancient monuments are unveiled and explained.

For the first time, people will be able to view a computer-generated recreation of what archaeologists believe was a major wooden structure -- a version of Britain's Stonehenge -- at the ancient seat of the Irish high kings in the Hill of Tara in County Meath.

Archaeologist Joe Fenwick revealed a LiDAR (Light Detecting and Ranging) laser beam had been used to scan the ground surface to create a three-dimensional map, which revealed more than 30 monuments around Tara.

Using another technique -- described as taking an X-ray through the hillside -- archaeologists discovered the huge monument, a ditch stretching six metres wide and three metres deep in the bedrock.

The ditch, circling the Mound of the Hostages passage tomb, separated the outside world from the ceremonial centre of Tara.

It was believed the ancient architects had also surrounded the ditch with a massive wooden structure on each side -- a version of Stonehenge -- on a large scale. Its sheer size meant a whole forest would have had to be cleared to build it.

"In scale, it is comparable, for example, to Croke Park's pitch. The Hill of Tara had enormous ritual significance over the course of 5,000-6,000 years, so it's not surprising that you get monuments of the scale of the ditch pit circle," said Mr. Fenwick, from the Department of Archaeology, NUI Galway.

Cutting-edge technology is helping to provide a new insight into the lives of our ancestors, according to the documentary makers behind 'Secrets of the Stones'.

It shows Ireland's first civilisation began 7,000 years ago, they withstood major climatic changes and voyaged throughout Europe, returning with new religions and mementos.

An RTE spokesman said the broadcaster, along with the Department of Education, would be sending two free copies of the book accompanying the series to all second-level schools in the country.

The first part of the 'Secrets of the Stones' will be shown on RTE One at 6.30pm on Easter Monday.