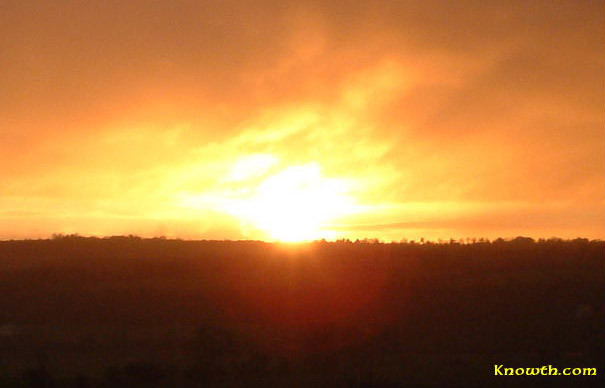 The winter solstice sunrise 21st December 2003, viewed from the entrance of the passage tomb. 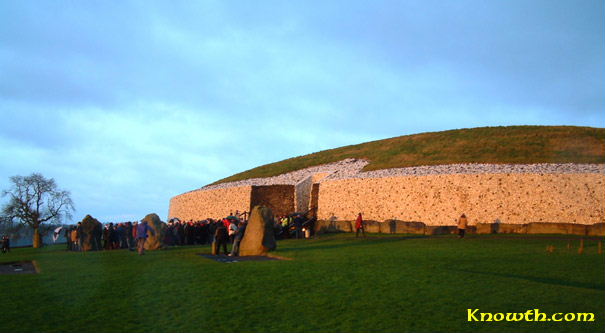 The white quartz front of the passage tomb at Newgrange illuminated by the winter solstice sunrise. 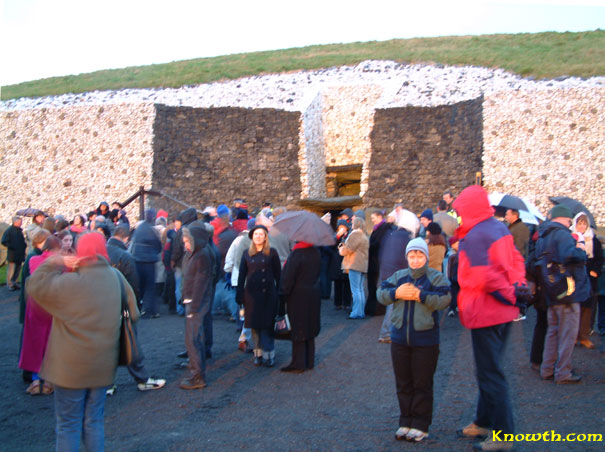 Admission to the chamber of the tomb at Newgrange for the Winter Solstice sunrise is by lottery. While the lucky people inside the chamber were enjoying the illumination of the passage and chamber, the rest of us on the outside were sheltering from a heavy shower. The weather is very changeable in Ireland, and to prove the point we had sunshine and a shower at the same time for the winter solstice morning.

An article by Eileen Batterbsy, printed in the Irish Times on the 22nd of December 2003.

Curiosity and belief create tradition and custom becomes ritual. This is true of many things, such as the annual mid-winter pilgrimage to the great Stone Age passage grave monument of Newgrange in Brú na Bóinne, the famous Boyne Valley in Co. Meath. During the solstice, the five shortest days of the year, the rising sun will, given kindly weather conditions, strike the northern or back recess of the chamber. Fusing nature and science, with the honouring of the dead, the phenomenon devised 5,000 years ago continues to fascinate.

On a good day, such as yesterday, the Gods and the ancients smiled. With them, about one hundred present-day mortals were also smiling as the famous honeyed rosy golden beam cast forth by a determined sun made its way towards the monument. God, art and precision engineering all have a part in creating what is the marvel of Newgrange. Hopes of experiencing the ingenious role of the roof box in the drama, from inside the chamber or from outside the monument facing a high ridge flaking the south bank of the river, draws pilgrims and devotees from all over the world, as well as Ireland.

Part of the magic is to arrive in the darkness; this is the morning following the longest night of the year. To be at Newgrange at the solstice is to welcome the beginning of the gradual return of the daylight. More importantly, it marks the first stages of the slow death of winter.

The mist rises from the river and the shadows that had appeared to be ghostly watchers are revealed as large standing stones also sharing in the vigil. Nature invariably defies the predictable. Early arrivals were all confident of a spectacular sunrise worthy of the sophisticated genius of the tomb-builders. "Conditions are perfect" became a form of greeting.

A small group quickly became a fair-sized gathering without a Santa in sight. The chosen few, selected by lottery to enter the chamber in the presence of the official guests, wore slightly apprehensive expressions. The wider public outside consisted of regulars known to attend every year, first-timers, zealots and the curious as well as those anxious to begin Christmas well, were prepared to wait.

Morning was well established, the shadows were gone. The sky could have been on loan from a Turner painting as the sun announced its presence against a mixture of brightening blue and contrasting purple. Cameras were focused. All eyes turned to the heavens. Pale pink turned to warm gold. Contented onlookers applauded. The sanded floor of the famous passage inside would begin to shimmer as the sun began its journey.

Almost by surprise, however rain began to fall. The sun and the rain danced. Would there be a loser? Not this time. The outcome was more magnificent duet than battle. Onlookers decided the real solstice was happening outside. It was.

With a final flourish of graceful theatre, nature decided to toss a rainbow straddling the monument, itself a serene juxtaposing of earth and stone. The colourful ribbon became a vast arc. More cameras flashed recording the image of a rainbow encircling Newgrange yesterday morning as winter began to die.

Twenty people squeezed themselves into a tight chamber in Ireland on Sunday, the shortest day of the year in the Northern Hemisphere, to marvel at a prehistoric "calendar clock" in operation. About 19,200 people applied this year for a coveted place inside the Newgrange tomb in County Meath to watch the phenomenon of the sun's rays on the midwinter solstice dramatically beaming deep into the burial mound.

"It's a once in a lifetime opportunity," said an environment ministry spokeswoman, who added that demand for a place in the tomb - available through a lottery - has soared in recent years. Only 20 people can fit into the 19-metre long chamber of the immense tomb north of Dublin. Newgrange, believed to be the world's oldest continuously roofed building, is orientated towards the rising sun. It was built 1,000 years before Britain's Stonehenge and 500 years before Egypt's pyramids. Modern scientists are astonished that the Stone Age builders over 5,000 years ago had the architectural skills and understanding of the movement of the sun to construct it.

Only at the midwinter solstice - the shortest day of the year on December 21 - does the rising sun shine all the way down the passage into the centre of the tomb. The phenomenon only lasts 17 minutes. It is believed that the Neolithic builders constructed it so that the sun shone on the ashes of their dead deep in the tomb at the solstice. This is thought to have represented a sign of rebirth, with the changing of the season giving renewed life to crops and animals.

Three years ago, when the queue of sun watchers meant that people would have to wait about 15 years to get a chance of a place in the tomb, the ministry introduced a lottery system. Now there are 50 names drawn from the applicant list and another reserve list of 50 are picked as a back-up. Each winner is allowed to bring a partner. People chosen are also allowed in on the days immediately before and after the solstice. Apart from Irish people, the spokeswoman said the winners this year included people from Britain and other European countries, Brazil, New Zealand and the United States. Newgrange is one of Ireland's top tourist attractions with over 200,000 visitors a year. The grass roofed tomb covers almost half a hectare. The whole Boyne River valley area around Newgrange is rich in Ireland's ancient history with the first people thought to have settled there 7,000 years ago. The 3,340 hectare area is designated a world heritage site by UNESCO.