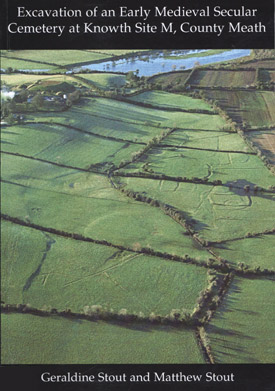 Excavation of an Early Medieval Secular Cemetery at Knowth Site M by Geraldine Stout and Matthew Stout. This report describes the results of three seasons of archaeological excavation that took place between 2002 and 2004 on a complex of earthworks (Site M) north-east of Knowth passage tomb cemetery, County Meath.

Excavation over twelve weeks revealed three main phases of activity: linear trenches and a cluster of irregularly shaped pits; a cemetery enclosed by two subcircular ditches of sixth- to tenth-century date and a later external earthwork constructed in the early medieval period. Evidence for agricultural and manufacturing activity within the enclosures was also identified. Large quantities of unstratified prehistoric lithics were recovered.

Knowth Site M is an early medieval cemetery with no ecclesiastical associations and can be compared to a number of important early secular cemeteries discovered in recent years in north-east Leinster. A third and final season of excavations has confirmed that an enigmatic series of earthen banks and ditches was an ancestral cemetery. Only fields away from the world famous passage tomb at Knowth, the monument known as Site M has been in use as a burial-ground from the time of St Patrick to the tenth century.

Three seasons of archaeological excavation between 2002 and 2004 examined an earthworks complex known as Knowth Site M. These revealed a cemetery enclosed by two subcircular ditches of 6th to 10th century date and a later, upstanding external earthwork also constructed in the early medieval period. The earthworks lie in a natural marshy basin immediately north-east and downslope of the passage tomb cemetery at Knowth, County Meath.

There has been much speculation about the true purpose of the site since an aerial photo of the monument was first published in 1964. It was not possible, however, to classify this enigmatic earthworks complex on the basis of its morphology or through geophysical survey. It was decided, therefore, to excavate the site (with funding from the Royal Irish Academy) in order to determine its date and function. Large quantities of unstratified prehistoric lithics were recovered, as were linear trenches that predated the enclosure, and two post-medieval clearance cairns, but all the other features of the site dated from the early medieval period.

The innermost enclosure (ditch 3) at Site M is an oval area enclosed by a single ditch with some evidence for an inner bank. The area enclosed by the ditch is 48m north-west/south-east by 40m. It is concentric to ditch 2, but is eccentrically located within the upstanding outer enclosure. Charcoal samples dated ditch 2 to 573AD-658AD. This ditch enclosed a cemetery that may have been further delimited by a wall. There was a sizable animal bone assemblage recovered mainly from ditch 3. Cattle, sheep and pig made up over 82% of the assemblage, which is dominated by cattle. The choicest cuts of meat were consumed on the site, suggestive of feasting associated with the burial ceremony.

75% of the graves were shallow, unmarked, unprotected extended inhumations. Charcoal samples from two graves produced dates between 597AD-673AD and 782AD-989AD. This indicates that burial took place on the site from the 7th to the 10th centuries. In the south-east of the inner enclosure there were 10 slab-lined graves. All of these were oriented approximately east/west. A bronze baluster-headed ring-headed pin with its ring missing, similar to a pin from Lagore crannog, County Meath, was found in the topsoil that covered the slab-lined graves.

Human bone at Knowth Site M was very poorly preserved. Even the teeth did not survive very well. Nonetheless, the remains of at least 52 burials were recovered. Identified burials consisted of 27 adults and 6 juveniles. 6 of the adults were identified as male and 3 as female. Of the adults that could be aged, there were two younger adult males present and one individual that was either an adolescent or a younger adult. One female was a late-middle-aged adult aged 35 to 44 years. There did not appear to be any evidence for older adults among the population. Six juveniles were identified but no infants were uncovered. It was only possible to estimate the stature of one male and one female. Keeping in mind the small sample, the male stature for Knowth is higher than at other early medieval sites and the female stature is in the top range.

The only evidence for a structure at Site M was found within the western portion of the area enclosed by the innermost enclosure. Four shallow, roughly circular pits could represent the remains of a trapezoidal structure. This 'structure' produced two dates of between 561AD and 652AD.

Concentric with the cemetery enclosure (ditch 3) was an outer ditch (ditch 2). It measured 74m north-west/south-east by 62.50m north-east/south-west in maximum external diameter. The ditch was between 9m to 10m outside the line of ditch 3. Ditch 2 contained animal bones throughout in a uniform fill of dark brown gravelly clay with charcoal. The widely spread remains of an internal bank survived in places. In the south-east of this middle enclosure there was some habitation evidence in the form of a compacted surface with embedded pebbles. This may have been a bone-working area as finds associated with this surface include worked antler, horn, bone, and, most spectacularly, a toggle-like object made from a sperm whale's tooth.

The outer ditch and banks, the upstanding outer earthworks, enclosed but were eccentric to ditches 2 and 3. These enclose a roughly circular area with an internal diameter of 80m. The earthworks comprise two banks and an intervening ditch. The site has an overall diameter of 110m. The enclosing earthworks are immediately adjacent to ditch 2 in the north-west (separated by less than 2m) but are 12m outside ditch 2 in the north-east. Ditch 1 had a stepped external face and was cut into natural gravel. The basal fill (grey silty clay) was similar to that found in ditch 2 and ditch 3 but with fewer animal bones present. The remains of a bank lay on either side of this ditch. Radiocarbon dates suggest a gradual expansion of the site outwards from c. 600AD (for the innermost ditch 3) to c. 700AD for the middle ditch, and the artefacts suggest that the use of the site continued into the 10th century. The outer banks and ditches, therefore, must have been constructed between the 9th and 10th centuries. 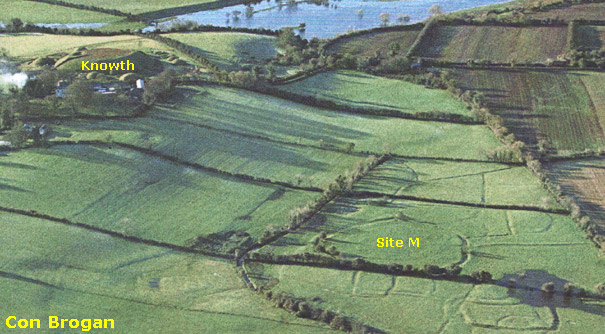